A colorful day of celebration was held at Morijo Primary school last week. Despite being the school holidays, students, their parents and the Morijo community all gathered to celebrate the arrival of 38 desks and text books, generously donated to the school by San Diego Zoo Global.

Moijo Primary School is situated in Kirimon Conservancy a newly formed Community Conservancy. The formation of this Conservancy was a joint collaboration of work with NRT, Loisaba and The Nature Conservancy.

Prior to the arrival of these desks and books the 60 students who attend Morijo Primary School aged three to seven years old had had no education materials. All 60 students are taught by just one teacher – John Serenoi Lenkirikai. John has followed in his father’s footsteps and achieved his diploma in Early Childhood Development immediately after leaving school. Representing San Diego Zoo Global at the event was Kirstie Ruppert, Senior Research Coordinator, and Jenna Stacy-Dawes, Research Coordinator. San Diego Zoo Global currently have two ongoing projects at Loisaba Conservancy.

One project focuses on reticulated giraffe, whose populations have experienced drastic declines over the past few decades. In the year and a half that the project has been active, 135 camera traps have been placed throughout Loisaba over 5 rounds capturing a total of 586,483 images! In addition to the camera trap data, the Twiga Walinzi (which means Giraffe Guards in Swahili), also conduct photo monitoring to help estimate giraffe movements and to build a database of images for every individual giraffe. This monitoring has resulted in 3,112 separate encounters of giraffe with the largest tower size observed at 48 individuals. The camera trap and photo monitoring data is combined with human dimensions work in the areas surrounding the conservancy as well as tracking data from 6 GPS tracking devices that were affixed to individual giraffe in June earlier this year.

The second project, which is in its pilot phase, focuses on leopards and to read more see here: https://loisaba.com/living-with-leopards-community-conflicts-in-northern-kenya/

Celebrations began with an opening speech by the school committee chairman, followed by two community elders and Tom Silvester, Loisaba CEO. Ambrose Letouliaa, SDZG’s on the ground researcher, along with Kirstie and Jenna gave a presentation to the audience on their work and the importance of co-existence with wildlife. Their most important finding to date from the giraffe project is that the estimated use of giraffe parts and product is at 30%! Following this, we were treated to some dancing from the Morijo community and a presentation of gifts to the visitors from the community. The celebrations then continued into the day.

We want to thank San Diego Zoo Global for their wonderful support to Morijo Primary School – these desks and books will not just help to educate the current 60 occupants of the school but many, many more to come. Thank you!!! 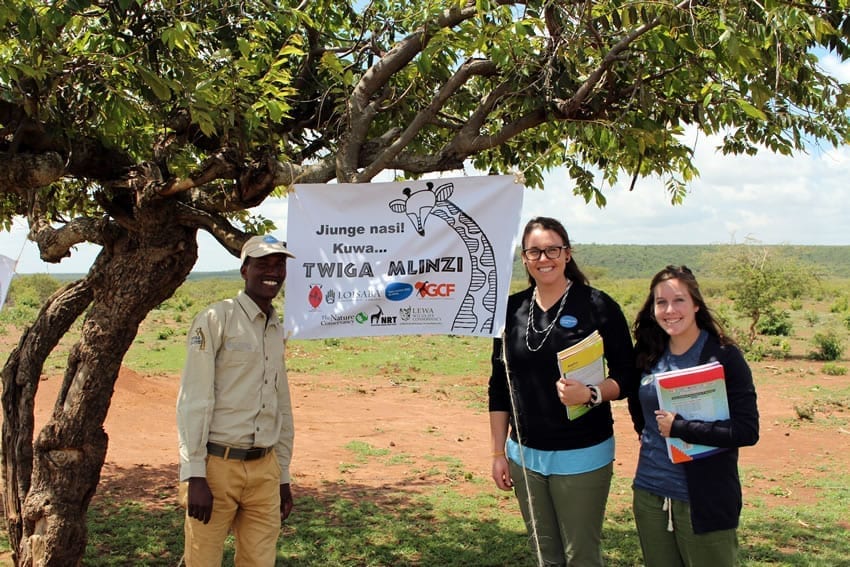