Blog
You are here: Home1 / Blog2 / News3 / Elephants on the frontline

On Thursday morning Amos Chege, our Conservation Officer, received an urgent report from the Starbeds Lodge manager, a malnourished looking elephant calf had been spotted. He immediately rushed to the scene, easily located the calf and carefully observed the situation – to avoid making any rash decisions.

Amos observed the elephant calf try to join a nearby elephant herd but watched it being repeatedly rejected by the matriarch. It was clear that this calf did not belong to this herd and had become separated from its mother elsewhere. It was not clear how this had happened but he looked in bad shape and a decision needed to be made quickly. After brief consultation, we called the dedicated staff at Reteti Elephant Sanctuary on the nearby Namunyak Conservancy. The first community run elephant orphanage in Africa specifically established to rescue and reintroduce abandoned elephant calves in the vast northern Kenya landscape.

Reteti chartered a plane from Tropic Air Kenya without delay and they arrived with the professional staff of the North Kenya Veterinary Service. The calf was expertly darted, loaded onto the plane, strapped in and whisked away to safety. While it is terribly sad that this calf became separated from its mother, elephants are an incredibly resilient species and we hear he is doing well at Reteti. We are confident he will make a full recovery and maybe some day he will find his way back to Loisaba.

By early next morning there was yet another report involving an elephant. This time, the ever vigilant conservancy rangers had spotted an elephant cow with what looked to be an arrow wound. By the time Amos got to the scene to confirm the report, light was fading and all efforts to locate it failed.

At the crack of dawn Amos and a team of rangers generously funded by The Nature Conservancy were once again on the trail of the elephant. It took three hours of patient tracking to locate it, amongst all the confusing footprints of other elephants. Eventually, in thick bush they caught up with her. She was indeed badly wounded and required urgent medical attention. The Kenya wildlife service Vet team led by Dr. Dominic Mijele in collaboration with DSWT were informed and arrived from Nanyuki within a couple of hours.

Unfortunately, the elephant cow was not cooperating and had strayed into very difficult terrain. It took over half an hour for Dr. Mijele to get into position to comfortably take a shot with his dart gun. True to his aim the dart found its target and the elephant cow went down. The wound was thoroughly cleaned and disinfected. Dr. Mijele was confident that she would make a full recovery over the coming week as the antibiotics take effect.

We can only speculate on what events led to her injury at the hands of a bow and arrow as well as the circumstances that led to the calf being abandoned. Regardless we feel incredibly lucky to work in landscape with such dedicated partners, all working tirelessly to look after Kenya’s wildlife: Kenya Wildlife Service; Space for Giants; Reteti Elephant Sanctuary Community United for Elephants; North Kenya Veterinary Service; DSWT; The Nature Conservancy; Tropic Air Kenya; Save the Elephants and Northern Rangelands Trust. 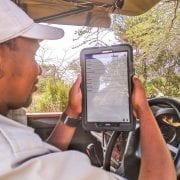 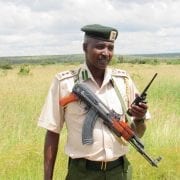